Beautiful words stir my heart. I will recite a lovely poem about the king, for my tongue is like the pen of a skillful poet.

THE HANDS OF THE EXPERT

in the hands of God

He stood looking down, towards the low desk which can rotate. He’s still strapping and has a muscular body even though he was not young anymore. His gaze is so deep and calm, such as kept the unfathomable secrets. Each wrinkle that formed on his face revealed the wisdom of a man who full of life experiences. He is devoting his attention to the clod of wet clay on the table in front of him. Yes, just shapeless the clod of clay which for others maybe meaningless. But he knows exactly that the clay could become something in his hands. Something surely that will be worth.

He said, “Can I not do with you, Israel, as this potter does?” declares the Lord.

“Like clay in the hand of the potter, so are you in my hand, Israel.”

Then he sat down. He is very enthusiastic and his eyes sparkled looking at the clod of clay on the table in front of him. His heart overflows with love that can not understandable. Because who can love a clod of clay??

We love him, because HE FIRST LOVED US.

His muscular hands begin to mold the clay on the table, while the table has rotated continuously. From his gesture anyone can know that he has trained very well to do his job. With painstaking care and patiently, his fingers are pressing, stroking, and massaging the clay.  He really wants it clay to be exactly like what he has designed. He’s doing it very carefully because he knew that he has very strong fingers. He does not want to give unnecessary pressure. All that he works must precise on the portion. No more and no less, because the wrong treatment would be destroyed it, and he does not want to.

And at the harvest, the delicate herbs and spices,
the dill and cumin, are treated delicately.
On the other hand, wheat is threshed and milled, but still not endlessly.
The farmer knows how to treat each kind of grain.
He’s learned it all from God-of-the-Angel-Armies,
who knows everything about when and how and where.

God is never and will never to do everything just for fun and without a serious purpose.

He is never perfunctory in doing His work.

He guarantees that all definitely on proper portions.

Actually, he can choose the easy way. He has endured decades of experience to mold the clay into useful tools. He is an expert in molding the clay with many techniques. If he wants quick and easy, he could use a mass production technique. But he does not want to make something with uniform results. He wants every tool he made become special with a touch of his hand, although he must spend more time, energy, and effort.

His eyes continue to watch carefully. Once in a while he wiped the sweat on his forehead with the back of his hand. “This time it would be worked”, he mumbles. He has done a process needed that was supposed to be of good quality clay. He has already to grind, to separate the good part from the bad part, sifted, and mixed the clay with certain materials required. He had been precisely measuring the water content so that the clay can be perfectly blended and he can mold it as his plan. “Finally finished”, a smile graced his lips. He was relieved because no need redo it from beginning. Several of his works before must be reprocessed because the results were not as his expectation.

But the pot he was shaping from the clay was marred in his hands; so the potter formed it into another pot, shaping it as seemed best to him.

The clay is shaped now. The meaningless a clod of clay has become a vase. His heart is happy even though he knows it is still halfway there. He has to rubbed and then decorating it vase.

The weather was very sunny. Blue sky smoothly curved without clouds. His skin was tanned like copper glistening in the sunlight. “Perfect,” he thought. Excited, he is taking the vase and put it in the open area for the sun can dry it, before it vase will be burned.

The furnace has been prepared and ready. Temperature was as required. This is the time to burn the vase in order to be strong and waterproof.

And we know that in all things God works for the good of those who love him, who have been called according to his purpose.

Now it’s time for the finishing touches. His face gleamed. With supple, his fingers held the paintbrush.  Within a few time the vase was wrapped in brown color with a smooth gradation. Then like dancing, his fingers daub some golden ink on the ribbon that engraved on both sides of it vase. Now the clod of clay has been completely transformed into a beautiful vase.  Someday, when it vase was placed on the alabaster table in the living room of a nobleman’s house with a bunch of fresh red roses sticking out of inside it, could we imagine that in the beginning it vase was only meaningless a clod of clay which trampled by people?

Are you meaningless a clod of clay? Are you a ruined vase? Or even a broken vase?

There is no a clay could mold and shape by itself.

There is no a vase could lift its dignity up by itself.

Let the Hands of the Expert who do it.

All you need to do is obey and surrender to HIM.

I’m still learning to write in English. I apologize if many grammatical errors. If you have suggestion i would be gladly accept. Thank you.

9 comments on “THE HANDS OF THE EXPERT” 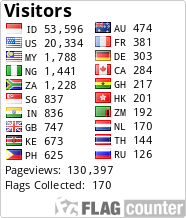